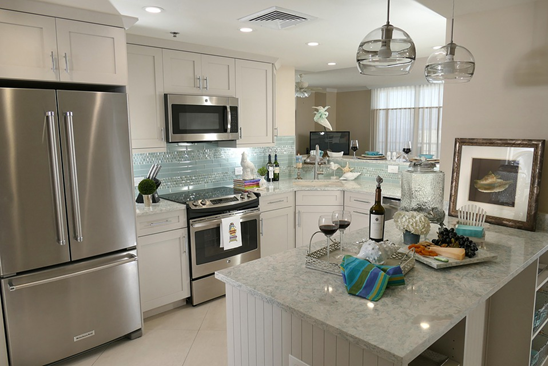 Not every home improvement is one to chase after at the start of the year. Some are too expansive and others are costlier than we’d like. Therefore, it’s helpful to choose those that aren’t too large, or to get help from contractors to get them completed earlier.

Here are 4 home improvements where it’s preferable to get them done sooner in the year.

Replace the Siding Around the House

Existing siding can become damaged for different reasons. Sometimes, fungus, mold, or mildew can form from the moisture through the different seasons. This doesn’t just damage the siding, but also the walls beneath it. Pests and small animals can also create fresh issues to deal with. Also, exterior paint can fade or flake away.

Even good siding doesn’t last forever, but it does perform admirably in protecting your home. Getting the siding replaced is a good task to have done before it gets tougher to complete in the spring or summertime.

Remodeling the kitchen is also good to get done sooner rather than later. Why is that? Because come summertime, the kids will be rushing in and out of the home, making it difficult to complete the work. Also, having the kitchen out-of-action during a summer staycation won’t be ideal even if you live just as a couple or alone.

Think about how you’d like to make better use of space. If you’re interested in changing the kitchen design, including adding some state-of-the-art induction hobs, then plan for that extra cost. Also, consider any bugbears or irritations with the current kitchen design and how these can be overcome through the process of remodeling it.

When the wall colors aren’t doing it for you anymore, then it may be time to get reinspired with something substantially louder and more eye-catching!

A statement wall is exactly that. The use of bold color choices, including richer, earthier hues is something that homeowners are beginning to embrace instead of sticking to pastel-based color selections. While colors leaning to the darker side are not for everyone (plenty of natural light coupled with good illumination is a good idea) they certainly will liven things up.

Make this an early weekend project when you can air out the home, so the paint smell won’t linger any longer than desirable.

With the advent of far more people working from home for the foreseeable future, homeowners that have previously embraced open floor designs are coming to regret that choice. Quite often, one person is trying to get work done and the openness of floor plans allows sound to echo around rather than containing it.

A switch to closed floor planning is possible for people who believe that working from home will now become an ongoing arrangement. Alternatively, adding some form of temporary separation or soundproofing is worth mulling over to better contain sound to specific areas of the home.

Home improvements aren’t all summertime activities during a staycation. See which ones can be arranged early in the year to get them completed sooner.

Previous articleHow to Choose a Roofing Contractor
Next articleWhen should you call a plumber for a clogged drain?